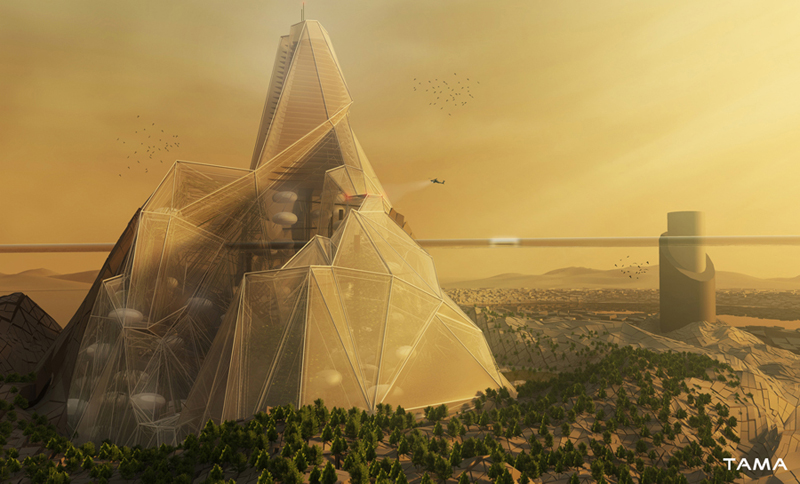 A Project to Address Desertification and Overpopulation, Taming the Unfriendliest of Environments

Fertile land is being overtaken by desertification at an alarming rate of thousands of square miles per year. Examples abound worldwide where dust clouds interfere with the natural formation of clouds, temperatures begin to rise, precipitation is reduced, and the extremes become exacerbated. People are forced to flee these regions as food becomes scarce and the living conditions intolerable.

The Living Mountain is a city-like skyscraper for one of the Earth’s harshest environments, the desert. Traditionally, high-rise buildings were part of a city landscape; they formed the famous city skyline. The Living Mountain IS the city: a protected, all in one, sustainable environment. The project affirms that while society works on the root causes of global warming, man can actually inhabit even the unfriendliest of earth's environments, live well and flourish, while improving the micro-climate and reversing the progress of desertification. In conjunction with lined, artificial lakes, this settlement could extract water from the regional substrate and recycle it through optimal use, treatment, circulation, and conservation. Water lost to evaporation would gradually increase humidity levels, in turn falling as rain through the orographic effect, stimulating vegetation growth, and resulting in a milder micro-climate.

The housing areas are envisioned as Living Pods with easy access to all the facilities. Rainwater is collected and circulated on top of the super-structure and freely cascades to the atrium while filtering the air and promoting the growth of indoor vegetation and crops. Vertical communication is achieved by elevator shafts placed between clusters of Living Pods.

Local materials will be used throughout the construction. Due to the shifting sands, the foundation will be on reinforced concrete piles. The rest of the superstructure will be made of steel and reinforced concrete. The Pods will be locally prefabricated of light translucent material. The outer skin is made of sturdy, synthetic material exhibiting ruggedness, insulation from solar radiation, and photovoltaic properties for the generation of electricity. We can easily envision a series of sister Living Mountain developments in the area that can have an influence on the entire region, creating landscapes, revealing landmarks.

The Living Mountain concept received an Honorable Mention among over 800 entries in the prestigious EVOLO Competition in New York City, and was well received by the professional community –it appeared on many professional websites internationally and several magazines featured it as a main article. In June 2011, it was Feature of the Month in the Focus Magazine, Italy. It was also featured in the Limited Edition Book EVOLO SKYSCRAPERS, which was praised by the Wall Street Journal as “one of the best books about the future of architecture.”

concept configuration of the Living Community

deserts of the world 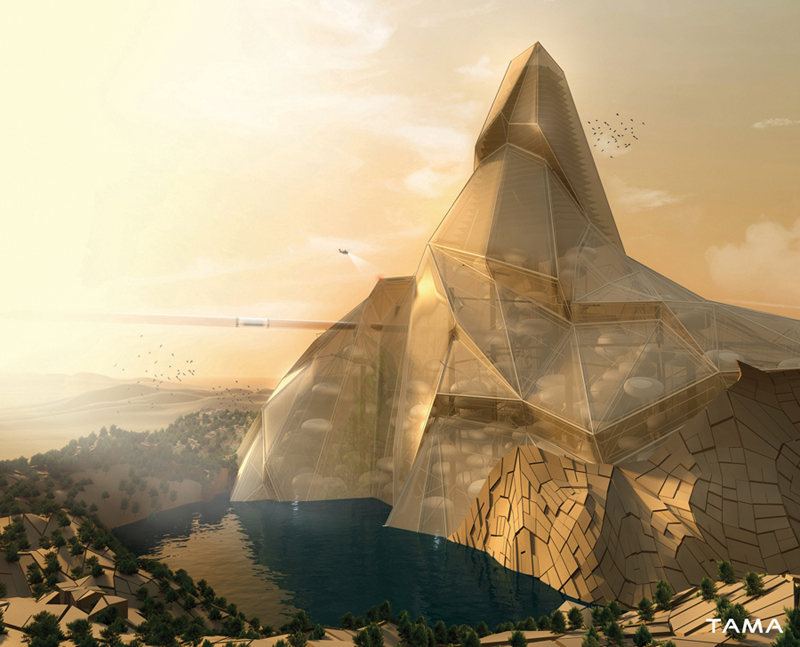 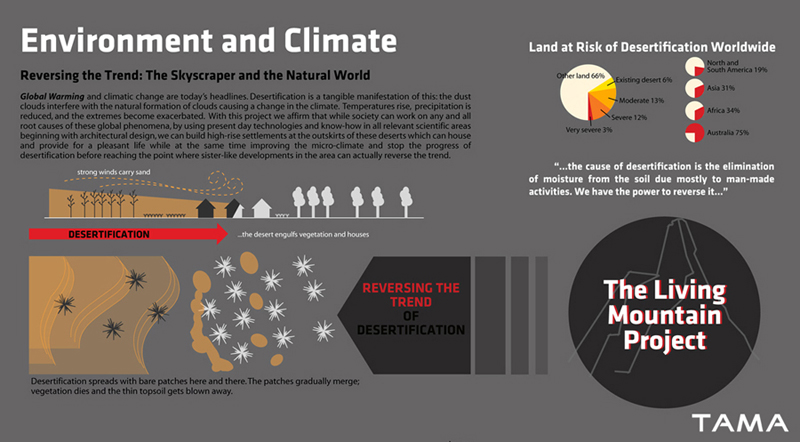 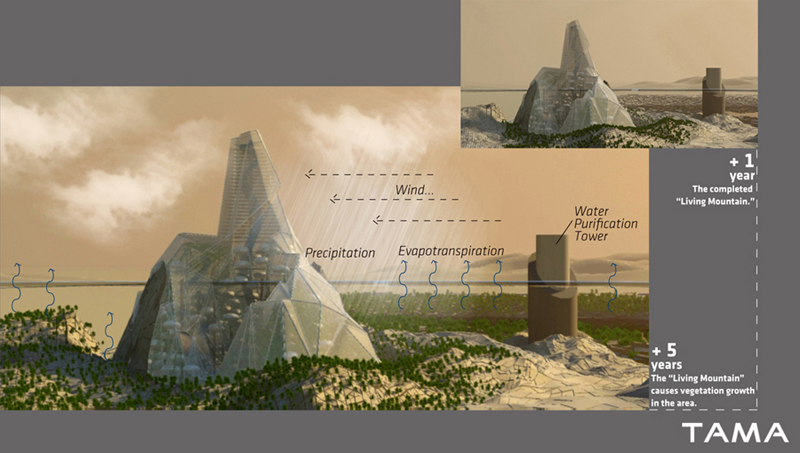 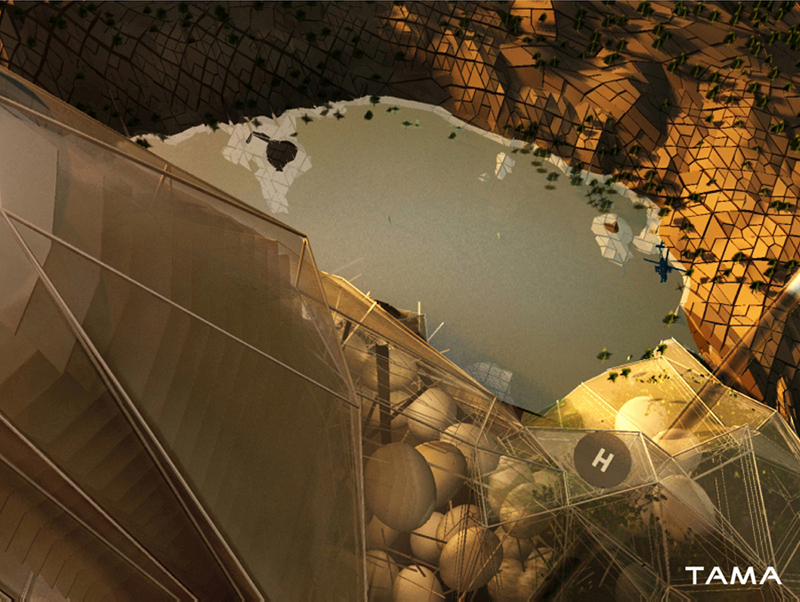 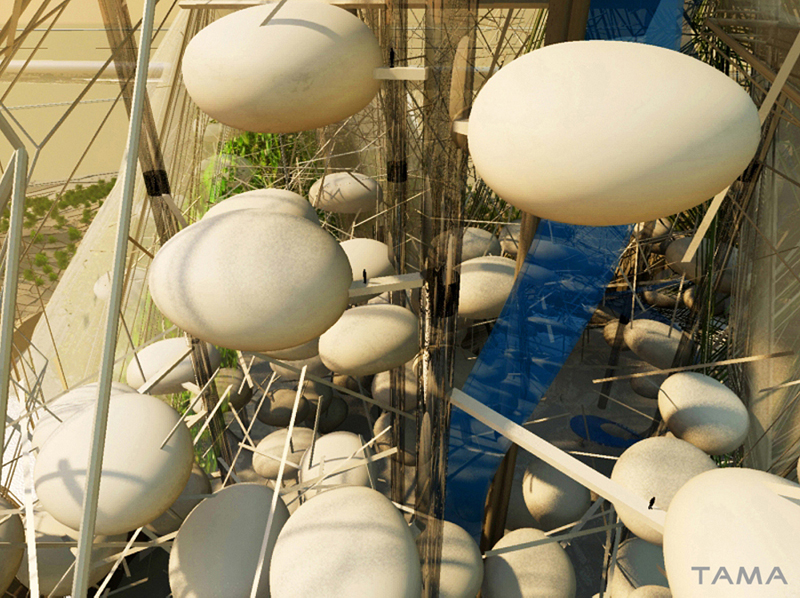 Living Pods: The Skyscraper and the Community